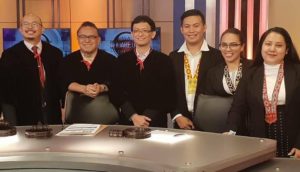 The BukSU Debaters with the jurors
College of Law

MALAYBALAY CITY (IPS) – The Debating team from the Bukidnon State University College of Law won against their counterpart from the University of the East in the preliminary round of the ABS-CBN News Channel (ANC) Square-Off: The Firm Debates on Thursday, October 18, lawyer Sherrymae O. Velos, faculty associate to the College of Law dean, said in a report to IPS.

The square off between BukSU and UE will be aired on Sunday, October 21 at 6p.m over ANC.

ANC chose BukSU COL among 14 out of 125 colleges throughout the country to take part in the series, considered as a top-rating debate show in the country.

The BukSU COL debating team, composed of Ms. Babylen S. Bahala, Mr. James M. Violon and Ms. Cristelle Estrada-Romuar Jurolan, was assigned to the negative side on the proposal ʺLet it be resolved that all matters relating to health of the President must be made publicʺ.

BukSU won the round against UE. The judges chose Ms. Bahala as Best Speaker. The team will debate against Arellano University in the semi-finals in November.

BukSU landed on the Top 4 when it last competed in the ANC Square-Off in 2015. The team made it to the semi-finals but lost to University of San Carlos, which was declared the winner that year.

Atty. Velos, who accompanied the team to Manila, said being selected among the 14 is already a privilege.

BukSU is one of only three Mindanao universities taking part in this yearʾs competition, aside from Cor Jesu College of Digos City and Ateneo de Davao University.(BukSU OP-Information and Publication Service with a report from the College of Law)