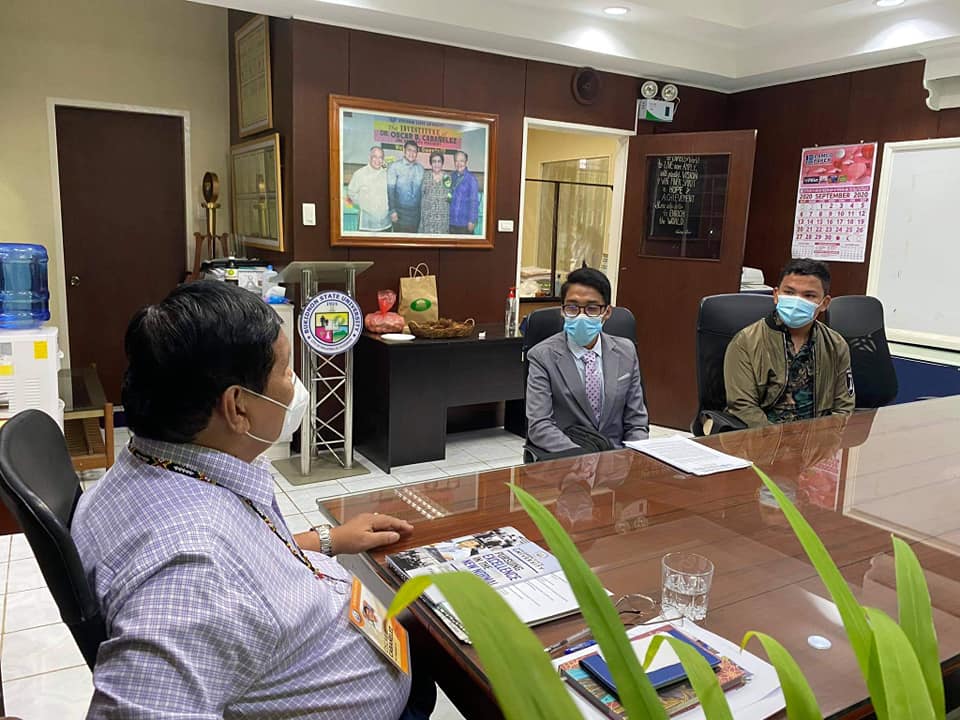 In photo: Dr. Oscar B. Cabañelez, University President with the Former student regent Joseph Gelacio  and Mr. Lawrence David S. Baylosis, acting Supreme Student Council president (on the right) at the Office of the President for a courtesy visit on September 10, 2020.

BukSU president Dr. Oscar B. Cabańelez announced this on September 16, 2020 during the President’s Time in the university’s official radio program, the “BukSU Updates”.

Dr. Cabańelez named and welcomed Mr. Lawrence David S. Baylosis as the acting Supreme Student Council president, who will represent BukSU’s thousands of students in the Board of Regents today, September 28, 2020.

Former student regent Joseph Gelacio told OP-IPS Mr. Baylosis took the helm by rule of succession. In the meantime, he said, that due to the implementation of the no in-person classes, the USG finds it difficult in holding an election for the current school year.

Mr. Baylosis served SSC Senator of the previous administration where he chaired the Committee on Clubs and Organizations.

His succession took effect on September 4, 2020 through the Joint Resolution No. 02, Series of 2020 wherein the Supreme Student Council consulted with other members of the University Student Government (USG) on the rule of succession for the officers of the next academic year.

The dean, however, is keen on holding an election as it is mandated in the Constitution of the Supreme Student Council.  (Ms. Lailanie S. Acola/Office of Student Services for OP-Information and Publication Service)

BukSU is committed to the development, implementation and improvement of the QMS of the University. The importance of understanding, meeting, and enhancing stakeholder requirements is also recognized. This is demonstrated through the Statement of Quality Policy. BukSU commits to provide excellent instruction, responsive research, sustainable extension and quality production for the highest satisfaction of its stakeholders through continual improvement and adherence to applicable requirements.