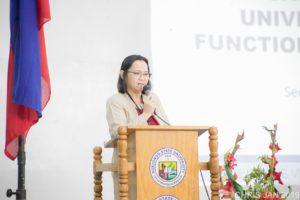 Dr. Cabańelez told the BukSU Updates radio program on January 8 that the new wave of appointments responds to the university’s needs and was based on wide consultations from across all stakeholders of the university.

Dr. Abejuela rose from the ranks. She previously served as chair of the Language and Letters Department of CAS prior to becoming dean in 2016. She assumed the post from Vice President for Research Extension and International Affairs Dr. Joy M. Mirasol, who was assigned on con-current officer-in-charge capacity from August 2019.

Dr. Abejuela is a graduate of Bachelor of Secondary Education Major in English and Master of Education in English Language Teaching. She finished her Doctor of Philosophy in Applied Linguistics from De La Salle University (DLSU).

Dr. Zita I. Dales, director of the Instructional Materials Development Center (IMDC), was appointed as the new CAS dean to replace Dr. Abejuela.

Dr. Dales is a graduate of Bachelor of Science in Civil Engineering in Central Mindanao University. She obtained her Master of Arts in Education Major in Math Education in the then Bukidnon State College. She obtained a Doctor of Philosophy in Mathematical Science Major in Mathematics Education. She also held previous positions in the university, namely, Chairperson of the Mathematics Department, Associate Dean of the Graduate School prior to her stint as IMDC director.

Dr. Jiemalyn B. Paulican, chair of the Community Development and Development Communication department of the College of Social Development and Technology was also appointed on con-current capacity as the new director of the IMDC/Intellectual Property Office.

Aside from the VPAA and CAS Dean, Dr. Cabańelez also appointed, Dr. Lorenzo B. Dinlayan III as the dean of the newly created College of Public Administration, carved out of the College of Business (COB).

The president also appointed Dr. Nestor Y. Cipriano, on con-current capacity as new dean for what’s left of the COB and as chair of the Accountancy Department and Deputy Quality Management Representative-Internal Quality Audit.

Dr. Albert A. Villanca, designated supervisor was named director of the Satellite Campuses.  Mr. Zenas B. Paloma was also named the chairperson of the College of Nursing and Dr. Alfeo B. Tulang was also named as the Supervisor of the Physical Plant and Maintenance Unit, replacing Mr. Cesar Jamero, who is retiring. Accounting Asst. Ms. Juditha G. Guegue was also named Focal Person to the Commission on Audit.

Dr. Cabañelez, also renewed previous designees and appointed new designees in lower offices. He said the designations will have to be renewed every year. (OP-Information and Publication Service with reports from Ms. Katherine B. Akut, Faculty Associate, OVPAA and Ms. Jade D. Montederamos/BS Development Communication intern)