BukSU partnered with the Philippine Eagle Foundation and the Forest Foundation Philippine in the online screening on October 14-15, 2020 scheduled in time with the death anniversary of Bukidnon’s environment hero Fr. Nerylito Satur. 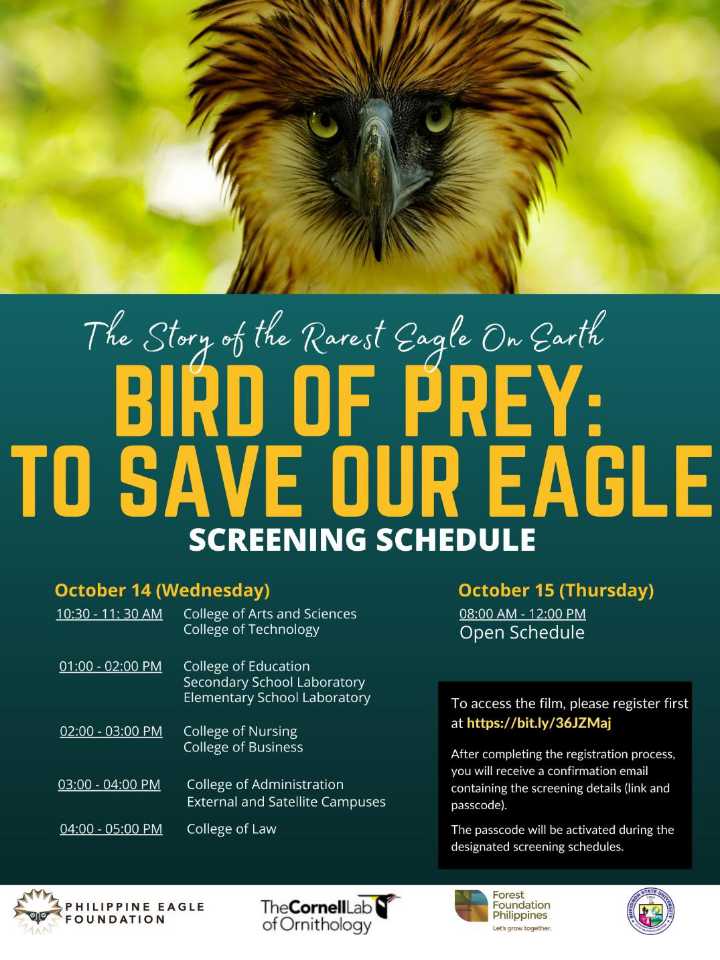 BukSU President Dr. Oscar B. Cabańelez, who led the opening program, cited the importance of conserving and protecting the Philippine Eagle and the environment as a whole.

He noted that BukSU has also taken part in the goal of preserving the natural beauty of the province of Bukidnon by participating and initiating extension projects such as this one.

“We are honored in BukSU to have with us our partner organizations in the goal of saving the Philippine Eagle. We are one with all of you in this endeavor.  It is unfair that we did not create this species but our actions are destroying it. We are morally obliged to stop their extinction,” he said in his opening remarks.

Dr. Cabańelez said that the Philippine Eagle, subject of the film, is already part of the image of the country whose uniqueness, strength, power and love for freedom exemplifies the Filipino people.  However, he added, securing the eagle has become increasingly difficult for the country due to deforestation and conversion of their natural habitat into commercial areas.

Close to 3,000 of the students, faculty and non-teaching personnel and other stakeholders who viewed the screening responded to the evaluation initiated for the event held per college after the opening program.

Dr. Joy M. Mirasol, Vice President for Research, Extension and International Affairs, spearheaded the initiative in the university, in coordination with the different academic units. BukSU encouraged faculty members to integrate the online screening of the movie to their class activities. It has also organized digital poster making, short poem writing, and essay writing contests to encourage participation.

Dr. Jayson Ibańez of the Philippine Eagle Foundation (PEF) said that through the two day online screening and with the convictions and exemplary life of Fr. Satur he hoped that a similar flame of environmental heroism is triggered and sustained with the citizens of the country.

“We should be guarding our healthy environment and do our share,” he added.

Atty Jose Andres Canivel of the Forest Foundation Philippines, a partner of the PEF, said in his recorded message that the film showed the efforts of PEF and how communities support and participate in conserving the Philippine eagle and its habitat. The Philippine Eagle is the country’s national bird.

“The Philippine Eagle is important because by conserving its habitat we are conserving hundreds of hectares of old growth natural forests and the biodiversity found therein,” he said.

He said its conservation contributes to the people’s well-being and survival with critical environmental services, like water provisioning for agricultural areas and cities.

The movie’s US-based director and cinematographers also sent messages for the opening program.

Director Eric Liner thanked BukSU, the other partners and the audience for the online screening. He said working on the film opened his eyes to the tireless effort to conserve the Philippine Eagle and to its real conservation challenges today.

In their video message, Cinematographers Neil Rettig and Laura Johnson expressed their hope that the audience will be inspired by the Philippine Eagle and stories of the people who dedicated their lives to save it. They also appealed for support, including volunteerism, for the sustainability of the efforts to save the Philippine Eagle.

According to the PEF, they have a successful run of public screenings of the Philippine Eagle documentary in over 100 strategic venues and engaged over 30,000 people, including nearly 1,000 people from Valencia and Maramag through the support of the Protected Area Management Board of Mt Kalatungan and the LGUs of the said towns.

“We strongly believe that the recent pandemic must not stop the opportunity for more Filipinos to watch and experience our national bird on film,” the PEF said in its invitation letter for BukSU to be a partner.

The PEF and the Cornell Lab of Ornithology (CLO) were behind the production of the film, which was edited in a 45-minute version for Philippine audiences.

Ibańez said he hoped the online screening will be the first of many future partnerships with the university. (Walter I. Balane/OP-Information and Publications Services)

BukSU is committed to the development, implementation and improvement of the QMS of the University. The importance of understanding, meeting, and enhancing stakeholder requirements is also recognized. This is demonstrated through the Statement of Quality Policy. BukSU commits to provide excellent instruction, responsive research, sustainable extension and quality production for the highest satisfaction of its stakeholders through continual improvement and adherence to applicable requirements.